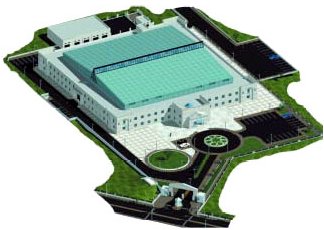 At a ground breaking ceremony at the SESAME site in Alaan Jordan on 6 January 2003 Koïchiro Matsuura, Director-General of UNESCO, announced that the SESAME project (Synchrotron-light for Experimental Science and Applications in the Middle East) is formally launched since he has received notice from seven Founding Members that they accept the statutes for the governance of the project. These Founding Members of SESAME are Bahrain, Egypt, Iran, Israel, Jordan, Palestinian Authority, and Turkey. They now form the SESAME Council, which, among other responsibilities, will provide the annual operating budget. Some other countries are also expected to join soon.

This Council replaces the International Interim Council that has met nine times since its formation in 1999. Herwig Schopper (former Director-General of CERN) was elected to continue as President of the Council with Khaled Toukan (Minister of Education of Jordan) and Dincer Ulku (Hacettepe University in Turkey) continuing as Vice-Presidents.

The Government of Jordan is providing the site and has agreed to fund the construction of the building, estimated at $6-8M, which will house the upgraded BESSY I light source that has been donated by the German Authorities. The upgraded ring will be in the 2-2.5 GeV range. The building has been designed and bids for its construction have been received. A contract for construction is expected to be signed in January or February 2003.

SESAME is an independent laboratory created under the auspices of UNESCO in much the same way that UNESCO assisted in the creation of CERN 50 years ago. Since the suggestion was made in 1997 that BESSY I be used in this way rather than discarded, the project has gained momentum with participation in meetings of the International Interim Council by 12 Members and 12 Observers. The BESSY I components are now in Jordan where upgrading will begin soon. Six scientific and technical workshops and schools have been held in the Middle East on topics relating to the project and 30 scientists and engineers from the Middle East have spent periods of up to two years working at synchrotron radiation laboratories in Europe and the US. Financial support for these activities has come from Members of the International Interim Council, UNESCO, synchrotron radiation laboratories in Europe and the US, the International Atomic Energy Agency (IAEA), the International Centre for Theoretical Physics (ICTP), the US Department of Energy (DOE), the Japanese Society for the Promotion of Science (JSPS) and other sources.

Starting with the appointment of a Technical Director in 2001 and an Administrative Director in 2002, the SESAME staff is being built up, with other appointments in progress. A strong training program is being implemented by a newly formed Training Committee aimed at securing the scientific staff, technical staff, and beam line support staff. In addition, a Technical Committee is advising the Technical Director and reviewing accelerator designs, and a Scientific Committee and Beam Lines Committee are working jointly to secure proposals for the scientific program and define the initial set of beam lines required for this program.

For more information please visit the SESAME web site (www.sesame.org.jo) or contact one of the following: