The 26th SESAME Council meeting was hosted by UNESCO in Paris on 26-27 May. In a message to the Delegates, the Director-General of UNESCO, Irina Bokova, said that SESAME exemplifies the power of science to bring people together and take all humanity forward.

Since its 25th meeting, the Council had received and unanimously approved a request from the European Union to become a SESAME Observer. The President of the Council noted with pleasure that the European Commission was therefore formally represented at a SESAME Council meeting for the first time.

Time table for commissioning and progress in construction

The Council approved plans for making up time in constructing SESAME that was lost last year, due to the collapse of the roof in December 2013 as a result of unusually heavy snow falls in Jordan and lack of funding. The revised plan foresees commissioning starting in mid-2016 with two of the radio frequency cavities and two of the 'day-one' beamlines: the other two cavities and the two other ‘day-one’ beam lines will be added in 2017 (three more Phase 1 beamlines will be added later).

In order for commissioning to start in mid-2016, and for the first stage of Phase 1 to be completed in 2017, some additional capital funding is still needed. The Council was very pleased to learn that Egypt will join Iran, Israel, Jordan, and Turkey (which are each providing $5 million) in making a voluntary contribution, which will partly fill the gap.

The Council was updated on progress in fabricating the magnets for the main storage ring, which is being managed by CERN, in collaboration with SESAME, using funds generously provided by the European Union. The first of 16 cells of the main ring was assembled at CERN in March – see the picture below. Tests showed that the quality of the magnets exceeds the specification. Meanwhile the fabrication of the radio-frequency cavities, which will accelerate the beam, is beginning in Italy, generously funded by the Italian Government.

New roof for the SESAME hall

The Council noted with satisfaction that the new roof of the SESAME hall is now installed, which is allowing work to accelerate (although it had not stopped when SESAME was without a roof in 2014, during which - remarkably - the booster synchrotron, which is now the highest energy accelerator in the Middle East, was successfully commissioned). The Council expressed its deep appreciation of the work of the two experts who led the design and construction of the steel structure of the roof: Salvator Noe (University of Trieste, whose work for SESAME was kindly supported by the Italian light-source Elettra) and Ulei Shurter (of Hoeltschi-schurter, who was kindly supported by the Paul Scherrer Institute in Switzerland).

The Council heard reports of discussions that are underway or foreseen with three potential new Members, and re-iterated its invitation to any interested countries to join SESAME.

The Council approved the Director’s recommendations for renewal of the membership of the Council’s Scientific and Technical Advisory Committees, and thanked the outgoing members for their contributions. When re-appointing Zehra Sayers (Sabanci University, Turkey) as Chair of the SAC, and Albin Wrulich (Paul Scherrer Institute, Switzerland) as Chair of the TAC, the Council thanked them warmly for their outstanding contributions and for their willingness to continue to devote time to helping SESAME.

The Council also expressed its thanks to Tahir Saeed (Member Finance, Pakistan Atomic Energy Commission) for his contribution over the last two years as Chair of the SESAME Finance Committee, and for agreeing to serve for a second two-year term.

Noting the outstanding work that he has done for SESAME, the Council decided to extend the appointment of the Director of Administration, Yasser Khalil (on leave from the Department of Nuclear Engineering, University of Alexandria) from May next year until a date to be agreed after the formal opening of SESAME.

The SESAME Council unanimously and enthusiastically decided to invite Rolf Heuer, Director General of CERN, to succeed Chris Llewellyn Smith as President of the SESAME Council. Accepting this invitation, Professor Heuer said that he was honoured to take this task for a project of such importance for science and for the region. The Council agreed that the hand-over will take place after the formal opening of SESAME in late 2016 or the first half of 2017.

Closing the meeting, the President expressed his satisfaction that lost time was being made up and that for the first time the date of commissioning and the start of the scientific programme could be foreseen with some certainty. 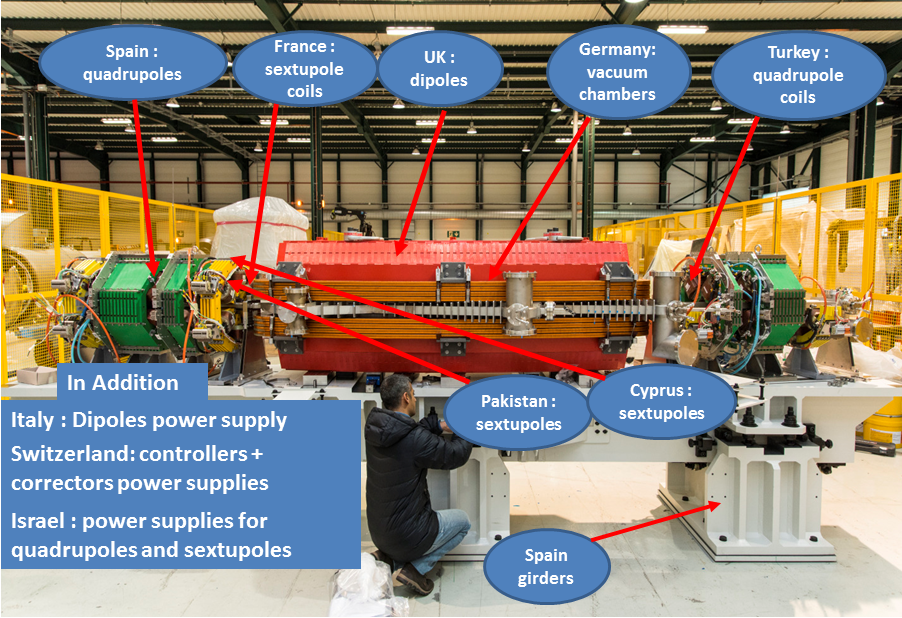 Source of the photo: © CERN | First of 16 cells of the SESAME storage ring, assembled for testing at CERN in late March. The components were constructed in collaboration between SESAME Members and Observers.

http://www.sciencediplomacy.org/perspective/2012/synchrotron-light-and-middle-east and http://mag.digitalpc.co.uk/fvx/iop/esrf/sesamebrochure/ describe the project and its history in more detail.

The future users of SESAME express their views in "Sesame synchrotron is a flash of unity in Middle East" http://www.bbc.co.uk/news/world-middle-east-20492294 and http://mag.digitalpc.co.uk/fvx/iop/esrf/sesamepeople/