RESOLUTIONS/ENDORSEMENTS IN SUPPORT OF SESAME

IOP Chief Executive (Institute of Physics, U.K.) letter of support (27 August 2009)
"We share the perspective of the US Liaison Committee of IUPAP and of IUPAP itself, that this [SESAME] is an excellent example of an initiative that should build bridges between diverse societies and contribute to the welfare of people through international scientific co-operation. Read More

IUBMB (International Union of Biochemistry and Molecular Biology) resolution (September 2009)
"The IUMBM strongly endorses SESAME and urges its National Committees and Commissions to identify opportunities for continued and expanded assistance to the project, including identifying mechanisms for increased participation by scientists from the region, and raising the visibility of its "science for peace" objectives at the level of scientific and policy-making communities. Read More 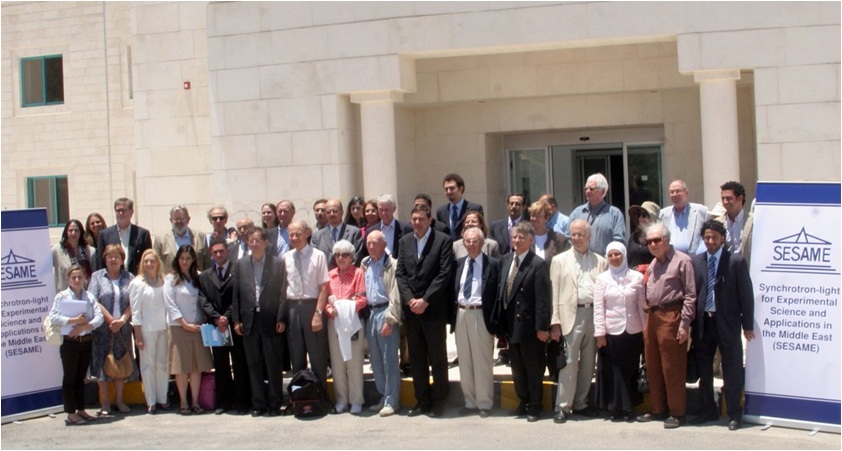 IUPAC (International Union of Pure and Applied Chemistry) statement (October 2011)
"The IUPAC enthusiastically supports the establishment and operation of SESAME. Not only is the science of fundamental importance, but the location of this world-class facility will provide an enormous boost to the scientific standing of the region and will also provide a stimulus for local and regional industry. Read More

IUPAP (International Union of Pure and Applied Physics) resolution (November 2011)
"The IUPAP continues to express very strong support for the establishment of SESAME as a critically-important regional scientific facility, and notes the progress made. It urgently calls on the relevant bodies to be forthcoming with the necessary funding to enable the project's objectives to be achieved and, within the limits of its resources, it commits itself to provide financial support to SESAME. Read More

IUPAP (International Union of Pure and Applied Physics) resolution (October 2008)
"The IUPAP strongly endorses SESAME and urges its national committees and Commissions to identify opportunities for continued and expanded assistance to the project, including identifying opportunities for broadening participation by scientists from the region, and raising the visibility of its "science for peace" objectives throughout scientific and policy-making communities.

"SESAME, as well as producing educational and economic benefits, will serve as a beacon, demonstrating how shared scientific initiatives can help light the way towards peace. Read More

U.K. National Commission for UNESCO statement (January 2012)
"SESAME promises to be a critically important regional scientific facility, while building bridges between scientists from different nations through international scientific collaboration, including joint training programmes and co-operative research. It is expected to have far-reaching beneficial effects on the development of national capacities. Read More

UNESCO Executive Board 164th session (May 2002)
"A quintessential UNESCO project combining capacity building with vital peace-building through science .......... a model project for other regions.

U.S. Liaison Committee of IUPAP resolution (12 June 2009)
"We enthusiastically welcome the new international S&T initiatives announced by President Barack Obama in his address in Cairo on 4 June 2009. .......... We cite the SESAME project as an initiative that is designed to build bridges between diverse societies and to contribute to the culture of peace through international scientific cooperation. .......... We believe that SESAME can serve as a model for the future centers of excellence that President Obama proposed in Cairo. Read More

U.S. National Commission for UNESCO statement (26 May 2010)
"We enthusiastically welcome the international science and technology initiatives announced by President Barack Obama in Cairo, June 4, 2009. We wish to recognize the SESAME as a scientific initiative that supports the diplomatic interests of the United States. Read More